If the electricity for a vertical farm is supplied by solar panels, the energy production takes up at least as much space as the vertical farm saves.

Urban agriculture in vertical, indoor “farms” is on the rise. Electric lights allow the crops to be grown in layers above each other year-round. Proponents argue that growers can save a lot of agricultural land in this way. Additional advantages are that less energy is needed to transport food (most people live in a city) and that less water and pesticides are required.

The vertical farms that have been commercially active for several years all focus on the same crops. These are agricultural products with a high water content, such as lettuce, tomatoes, cucumbers, peppers, and herbs. However, these are not crops that can feed a city. They contain hardly any carbohydrates, proteins, or fats. To feed a city, it takes grains, legumes, root crops, and oil crops. These are now grown globally on 16 million square kilometers of farmland – almost the size of South America.

An art installation currently presented in Brussels – The Farm – explores what it would take to grow wheat in a vertical farm. For the experiment, 1 square meter of wheat was sown in a completely artificial environment. By measuring the input of raw materials such as energy and water, the project shows the extent to which natural ecosystems support our food production. When wheat is planted in the ground next to each other, instead of above, the sun provides free energy and the clouds free water.

The experiment shows that growing 1m2 of wheat in an artificial environment costs 2,577 kilowatt-hours of electricity and 394 liters of water per year. The energy required for the hardware production (such as lighting) is not included in these results, so this is an underestimate. The building’s energy cost is also not taken into account, and that concerns both the construction and its use, for example, for heating, cooling and pumping water. 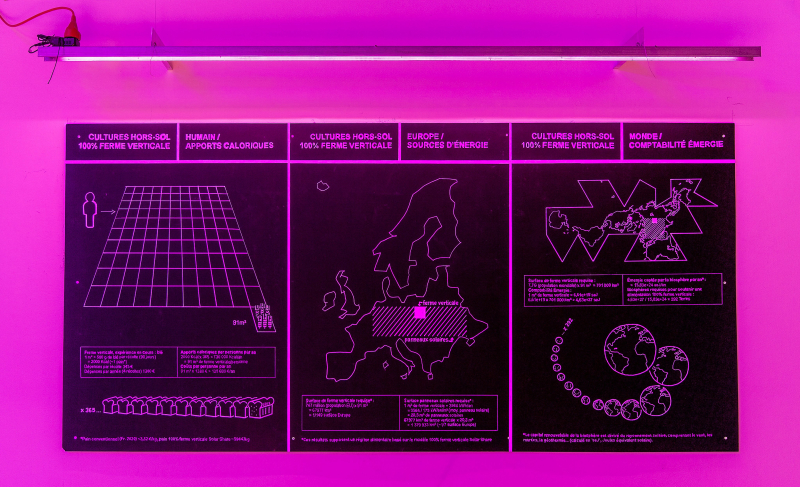 The cost calculation does include the price of the equipment (1,227 euros). The lifespan of the infrastructure is estimated at 8 years. Converted, the production of 1 m2 of wheat in an artificial environment costs 610 euros per square meter per year (including infrastructure, electricity, and water). Of this, 412 euros goes to electricity consumption and only 1 euro to water consumption. This calculation may be an overestimate because the installation is set up in an exhibition space.

The “farm” produces four harvests per year. With every harvest, enough wheat is grown to make one loaf of bread (580 grams), which has a cost of at least 345 euros. Each loaf contains 2,000 kilocalories, the amount that an average person needs per day. As a result, 91 m2 of artificially produced wheat is necessary for each person, with a total cost of 125,680 euros per year.

The paradox of vertical farming

Artificial lighting saves land because plants can be grown above each other, but if the electricity for the lighting comes from solar panels, then the savings are canceled out by the land required to install the solar panels. The vertical farm is a paradox unless fossil fuels provide the energy. In that case, there’s not much sustainable about it.

Calculated at a yield of 175 kilowatt-hours per square meter of solar panel per year, the indoor cultivation of 1 m2 of wheat requires 20 m2 of solar panels. This is a underestimate because the calculations are based on the average yield of a solar panel. There is much less sunlight in winter than in summer. In reality, the vertical farm requires many more solar panels to keep operating all year round. There is also a need for an energy storage infrastructure, which costs money and energy too. Finally, solar panels’ production also requires energy, which would demand even more space if the production process itself were to run on solar panels.

All this criticism also applies to vertical farms where lettuce and tomatoes are grown. In this case, there is a significant reduction in water use. These companies are profitable, but only because the process relies on a supply of cheap fossil fuels. If solar panels supplied the energy, the extra costs and space for the energy supply would again cancel out the savings in terms of space and costs. The only advantage of a vertical farm would then be the shorter transport distances. Still, we could just as well make transport between town and countryside more sustainable.

The problem with agriculture is not that it happens in the countryside. The problem is that it relies heavily on fossil fuels. The vertical farm is not the solution since it replaces, once again, the free and renewable energy from the sun with expensive technology that is dependent on fossil fuels (LED lamps + computers + concrete buildings + solar panels). Our lifestyle is becoming less and less sustainable, increasingly dependent on raw materials, infrastructure, machines, and fossil energy. Unfortunately, this also applies to almost all technology that we nowadays label sustainable.

ASu
I am tech enthusiast and a keen learner, Currently pursuing Bachelors in Computer Science from University of Delhi
https://technewz.org

I Refused to Become an FBI Informant. The Government Put Me on the No Fly List

The number of points a story has accumulated on Hacker News is a good indicator for how relevant and overall how good the story is. I noticed that the average front page story has a lot more points today than it would have had a few years back. This is very likely a consequence of […]